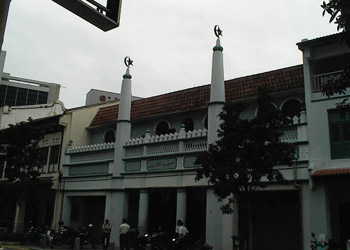 The masjid, which bears the imprint of South Indian architecture in its narrow frontages, which are defined by two minaret-style towers, was founded in 1827. But it was only in 1855, that a formal building was set up. In 1974, the old generation masjid located in Central Singapore was gazetted as one of the national monuments. With a capacity of 500, it serves the needs of office workers in the Shenton Road area. Unlike neighbourhood masjids, which spring to life in the evening, this masjid is relatively quiet except for its occasional Tafsir Al-Quran (Al-Quran interpretation) courses.