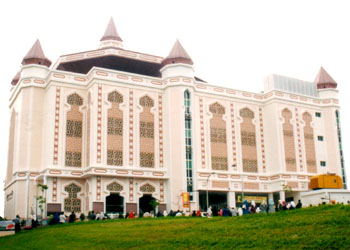 The four-storey Mosque was opened for prayers on 2 May 2003. It could accommodate about 5,000 jemaah in one congregation. The building comprises a basement car park, 18 classrooms, auditorium for 130 people, a computer room and a lift serving all floors.

The jewel-shaped dome culminating with star-like apex symbolize unity and act of transition between Allah and his faithful servants. The multi-painted star tinted glass roof symbolize openness. The six minarets symbolize the six tenets of Iman. One of the tallest minarets, stylized from the concept of a jewel-shaped dome culminating with the star and crescent signifies concentration, openness and victory, as well as sovereignty and divinity. It also provides a high point from which to summon the faithful for congregational prayer and is lighted at night and highlights the elevated crescent and star.