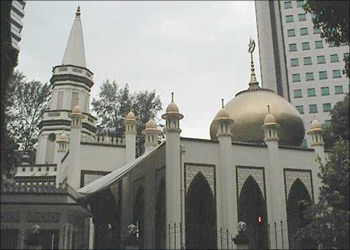 This is another old generation masjid built from donation from a wealthy lady named Fatimah. Located in the Central district, it was completed in 1846. the masjid bears the imprint of colonial architect J T Thomson, is a charming blend of local and European architecture. It is today one of Singapore’s national monuments. Extensive renovation work was carried out several years ago in which its leaning minaret was righted. The masjid, which can accommodate up to 600 people offers religious lectures on an ad-hoc basis. It is particularly popular among office workers in Jalan Sultan area