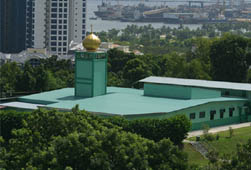 Built in 1961 by Muslim members of the British army, this old generation masjid was renamed Tentera Di Raja in recognition of their contributions. Located in the West and close to the National University of Singapore, it is distinguished by its minaret topped by a gold-painted dome. With a capacity of 1000 people, its newly-set up Youth Wing whose members are mostly undergraduates has recently embarked on a tuition scheme called EMAS (English, Maths and Science) for primary six children.